The Bordeaux  is a muscular dog with a gigantic, wrinkled head and a short, stocky body. These features make this French breed a very powerful and intimating dog. They have a medium to short but wide muzzle that averages about a third the length of their head. The nose is big and the upper lip hangs down in thick wrinkles over their lower jaws.

The dog has a loose fold of skin that hangs from his neck, and light or dark brown eyes that are set far apart. He has small ears compared to the rest of his body. The base of his tail is broad but tapers off at the end. He has muscular legs, a broad chest and loose skin.

The adult Dogue de Bordeaux usually weighs between 120 to 150 pounds and stands up to 24- 27 inches high ( 60-70cm.) Their coat varies from light to dark shades of brown and sometimes they’ll have a reddish color mixed in. Around the eyes, nose and lips are usually a darker shade of brown or red, and some dogs will have white marks on the toes and chest area. 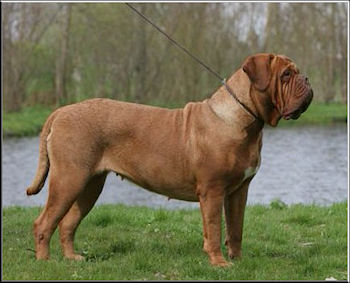 The Bordeaux Bulldog is a wonderful breed for any type of family. He’s gentle, calm and one of the most loyal dogs you’ll ever encounter. He’s patient but fearless, so he makes an excellent guard dog that will watch over your family and protect you with his life. Don’t let his size and intimidating looks fool you, he’s a gentle creature that would do great with children. However, it is important that you understand the nature of a dog and establish yourself as pack leader before bringing this breed into your home.

This breed of dog needs proper training because he is both fearless and confrontational. You must establish yourself as the leader of the pack or he will assume this role and your life will be chaotic. He needs direction and a leader so he can be the gentle creature he is by nature. When the pack leader is established, order will follow, which is why you need to be calm but firm at all times with your Dogue de Bordeaux.

If possible, he needs to be socialized with people and other animals when he’s a pup. Without socialization, he could become very aggressive when he meets other dogs. Show confidence, be consistent and respect your dog, and he will respect and follow you. 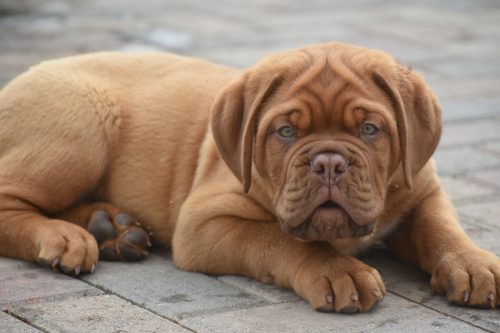